We have tooth issues in this house. First, Jack kicked Natalie in the face and her tooth fell out. The dentist assured us it was loose anyway. As if that made us feel any better about the mortal combat going down in our living room. Then one day I noticed Millie was missing half of her front tooth. Again, the dentist checked to make sure all was OK. We are still unsure of how and when she fell. Bad parents? Maybe. Finally, Natalie and Jack got into another scrap and Jack ended up smashing his face off of our coffee table. Four loose teeth. Turns out, the dentist was wrong though. One of the teeth didn’t re-root itself. It started turning a yucky brown colour.

Yesterday Jack went to the dentist and had his brown tooth pulled. He wasn’t anxious or upset about this dentist trip. In fact, the dentist took a look and asked Jack if he thought it would be better to wait for a few days to pull it out. He told Jack that he understood how he might be scared to do it right then and there. Jack just told him to get it over with. He was totally fine with the idea of this man he didn’t really know, yanking his front tooth out. The dentist couldn’t believe it! After a needle and laughing gas, Jack was carrying his tooth in a little box. He came home and sat with his tooth guessing how much he’d get from the Tooth Fairy. It was good fun.

Then it was time for bed. Jack kept trying to avoid going. He didn’t want to carry his tooth upstairs. He wanted nothing to do with the whole Tooth Fairy situation. Eventually he flat out told us that he was scared of her. He didn’t like the idea of this “fairy” touching his pillow while he slept. He wasn’t going to have it. Eventually he thought it would be a good idea if we put his tooth under the pillow in the spare room. That way the Tooth Fairy wouldn’t have to go near his pillow. That’s exactly how he wanted the trade to go down. We did as he asked.

I was trying to think of why he was so afraid of this friendly fairy who leaves money. Hell, I wish she’d come and leave money under my pillow. When I asked Jack he brought up Percy, our Elf on the Shelf from this past Christmas. Jack hated Percy. He was terrified of him, and never did get used to his presence. He was always wary when he’d have to walk by him. He was petrified that Percy would come to life and attack him at any given moment.

When Jack asked me if the Tooth Fairy is like Percy I knew that the Elf on the Shelf wasn’t nearly as fun for Jack as it was meant to be. Now Jack is afraid of money-toting fairies who take your teeth while you sleep and elves that come alive at night. I can’t wait until Easter, when we have to assure Jack that the Easter Bunny won’t go into his room. 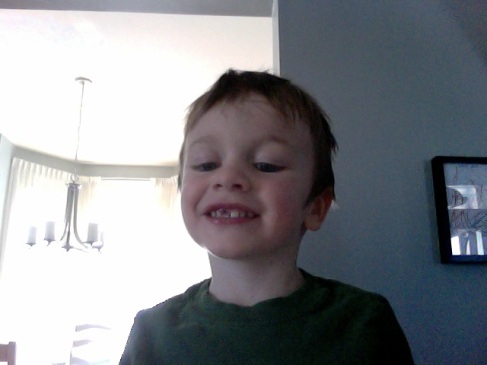